Using Photoshop to repair papyri that have sustained damage is a technique I’ve used for several images featured in the Book of the Dead exhibition.

The environment in which ancient Egyptian funerary texts had lived – sealed away in tombs in the hot, dry climate of Egypt – is what’s allowed them to survive for thousands of years. No mean feat for something made from such an easily degradable and damageable organic material.

Whilst some funerary texts have survived amazingly well, such as the famous Book of the Dead of Ani at the British Museum, others have not fared so well.

For instance, the Egyptians would sometimes fold and roll the sheets of papyrus, which would cause them to crack and break as they dried out over the years.

This is what’s happened to some of the papyri in the Garstang Museum’s collection that I’ve photographed.

Although most of the sheets of papyri are enclosed between two sheets of glass – the best way to protect and preserve them – it was done many years ago, and some of the fragments have since slipped about inside the glass, so the fragments don’t always line up well.

Employing a conservationist to take the papyri out of their glass containers and reassemble them is a costly and time-consuming affair. Using Photoshop to digitally reassemble pieces, however, is much less so (and more fun for me, too).

The Photoshop technique for repairing papyri

So, what is it I’m doing when I’m repairing papyri? The purpose is to pull together and realign broken sections of papyrus. The example I’m using here is from a copy of the Amduat at the Garstang Museum. The Amduat was a funerary text whose contents depicted the nighttime journey of the sun-god through the underworld. This particular copy belonged to the priestess Tjatayundenit, who lived in Thebes in the 21st Dynasty (1077–943 BC).

One of the details I’d particularly wanted to pick out was an over-sized nTr hieroglyph (the Egyptian word for ‘god’). Unfortunately, as you can see from the photo below, there’s a bloody great break running right down the middle. 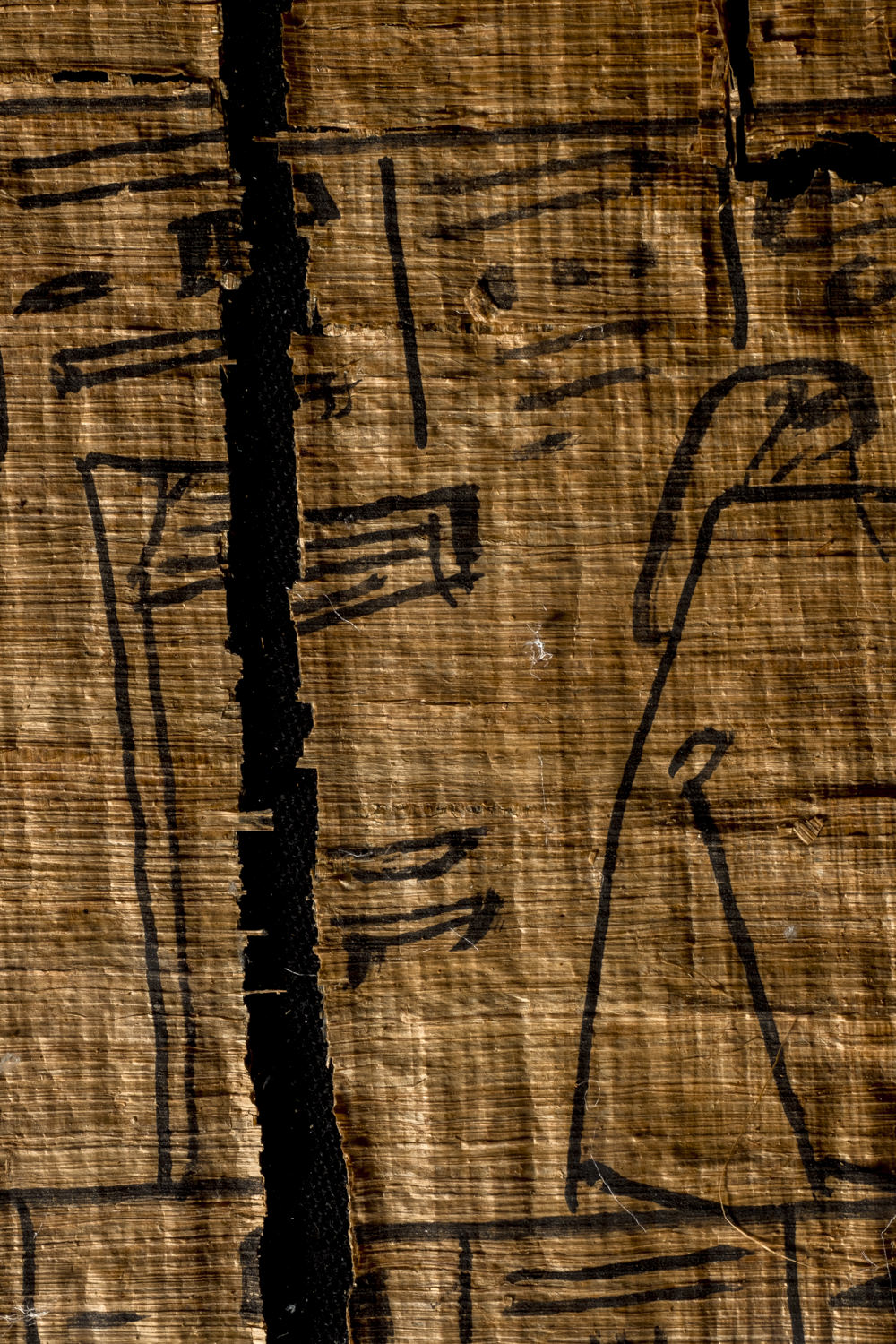 I’d taken two photos of the hieroglyph; one with the glyph a little to the left of the image and the other to the right. This meant that when I pulled it together in Photoshop, I had some extra room to play with.

I loaded both photos into one Photoshop document as layers (you can see the layers as two thumbnails at the right of the screen in the screenshot below). Using the Quick Selection tool, I made a rough selection of all the papyrus to the right of the break in the top layer (the white, dashed lines around the right-hand section of papyrus):

I then zoomed in to refine my selection to make sure I’d included all the little jagged bits along the broken edge:

I used the selection to create a mask on the layer. A mask hides everything that’s not included in the selection, making that part of the layer transparent so you can see the layer below it. You can see the mask in the screenshot next to the top thumbnail in black and white; white is visible, black is hidden. What you see in the slightly odd-looking picture below is the left-hand side of the underneath layer showing through the hidden part of the top layer:

Moving the layers around to realign the papyrus

The next stage was to move the top layer around until it lined up with the bottom layer. Unfortunately, both edges of the papyri are a little curled up at the bottom (presumably from where it was folded …?), making it impossible to bring them together completely:

In the close-up below, you can see that the layers aren’t perfect; you can still see the break. I could, if I wanted, use Photoshop to reconstruct the damaged parts: to cover up the break and paint in bits of missing ink. However, this is a step too far for me. It’s one thing to remove empty space, but another to actually add in what wasn’t already there.

Cropping and recomposing the photo

The last step was to straighten and crop the image to get the composition right:

And here’s the finished product. I hope you’ll agree that it makes for a much more comprehensive and aesthetically pleasing image.

Are you struggling to get your photos edited?

Unless otherwise credited, all photos on in this post are © Julia Thorne. If you’d like to use any of my photos in a lecture, presentation or blog post, please don’t just take them; drop me an email via my contact page. If you share them on social media, I’d appreciate a link back to this site or to one of my social media accounts. Thanks!

Find gorgeously geeky gifts for Egyptologists and Egyptophiles, in my online shop now:

Read my other articles

So, you’ve decided it’s time to get a new camera, or – at least – to start saving up. But, good lord, there’s myriad cameras out there. All sorts of shapes and sizes, different names and models and f-numbers and sensors and megapixels and IBIS’s and lenses and this and that and … aaaargh!

This post will help you think through the most important things you should be taking into consideration when buying a camera to start narrowing down your choices and make your shopping easier and more enjoyable.

The different types of digital camera

The world of cameras and photography is vast and sometimes confusing. Could you tell me much about your camera beyond the brand and whether you can change the lenses on it or not? Perhaps you can, in which case you

What is aperture and depth-of-field?

You might have heard the terms ‘aperture’ and ‘depth of field’ floating around in the photography world, and you might kind of have an idea of what they are. But perhaps not entirely. And not enough to really know how